Since we opened in July 2011 we have had people come to our Project ,. spend a few months with us and then move on. Sometimes that move on has been because Recovery opportunites have come at the wrong time and we try to keep track of members who are going through further torture in their Recovery journey.and at other times members disappear because really good positive things have happened.

Here we have jotted down some of the positive happenings in our members lives in recognition and celebration of the joys of recovery.

Suze who walked through the door in the Autumn of last year seeking the most basic of help – help with her alcoholism and a roof over her head – has since completed a Structured Treatment programme, been rehoused (initially badly) and is now an enthusiastic volunteer both for the Project and externally providing IT training skills across Camden and Islington.

In March 2012 several of our members played roles in Substance Misuse The Musical an Outside Edge production. Outside Edge is a theatricalcompany using Drama to engage those recovery from drug addiction. Twenty Eagle members went along to cheer our colleagues on and have a rabble rousing evening at Hoxton Music Hall.

Over the time Eagle has been open several members have been reunited with their children. Talking their feelings over with fellow peers who have had similar experiences assisted in grounding their expecations and adding to the emotional success

Chris has been reunited with his young daughter and has regular weekly visits whilst also getting back into the carpentry trade. Paid work and loving time with his dauighter  “its a miracle”

Ozzie was signposted to a relevant  legal service, has located his daughter and her mother and now has agreed multiple parental visits each week. ” where did that come from…its what recovery brings”

Jenn has been regularly visiting her son who has been in foster care. He is on his way home to Mum not just for Christmas but permanently reunited at home. “Its good to be rebuilding family life”

On the work and job opportunities front two of our management committee have gained paid empolyment after retraining and many months of volunteer assignments.. Bianca is working at a Crisis Intervention Centre for those with addiction issues “carrying the message that all is possible” and Sasha started as a DIP (Drug Intervention Programme) worker in West London after establishing the Carers side of Eagle and qualifying as a Drugs worker in addition to her Counselling diploma. 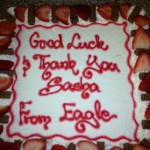 Volunteering opportunities have been taken up by Christine and Abna. Christine is revisiting her catering qualifications and skills and has taken on job club guidance whilst Abna has taken the Charity shop route and anticipates being in paid employment at the beginning of the New Year.

Lisa went back at college studying for a diploma in Health & Social Care with the longer term objective of working h with vulnerable adults in the borough. ” I didnt know I was good enough….but I do now”

Most reecntly in mid November a group of Eagle members took part in a drama workshop presentation around Safeguarding Vulnerable Adults. Fifty professionals and clients attended which stimulated a lively discussion on borough facilities and support on this subject. The workshop production was managed by Christine Handy from City & Islington College and funded by Islingtons Safeguarding team.  Congratulations all round.

Amd its coming up to Christmas when all are more sensitive and vulnerable to emotional triggers than usual. Lets all be aware of our vulnerable friends and colleagues . A phone call doesnt take much.  It may relieve tension, lift some sadness, push away loneliness or help celebrate joy. It may save a life.   Be caring be responsible.  GB