August 23rd the Eagle day trip to Brighton, with everybody arriving at 9:00 for a 9:30 departure we left promptly at 9:45, the weather though warm was  fairly cloudy. After a brief comfort break at Pease Pottage services we arrived in Brighton around 12:30,  bathed in hazy sunshine but again quite warm,  the  pebbled beach with its familiar pale Green Promonade rails whilst not crowded appeared to be fairly busy with other day trippers and Holiday makers, it was at this point we as a group decided to split up and went off to do our own thing , me along with my Sister her daughter and her friend went to the Pier which appeared very boisterous and noisy, and here I managed to look a right twit , my sister pointed to a Tower behind me and said “I wonder what that is” ? I replied that I didn’t know but there was another one directly opposite , to then realise  much to my embarressment that I was actually looking at a reflection of the tower behind me  in the window behind my Nieces head ! after  a cup of Tea with my Sister she went off to the Funfair where the girls were, I  set off for a look around starting with the Pavillion but only from the outside, my curiosity about the interior  was not strong enough for me to consider  parting  with £13.00 for a look around. 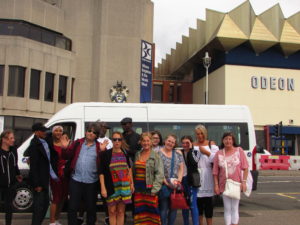 I then set off in search of Guitar shops which I had been informed were very good and so they were, I spent the next hour or so in these shops playing (?) on  lovely guitars  -none of which I could afford- trying to look and act like I knew what I was doing and convincing no one especially a 10 year old boy who was distinctly unimpressed giving me a look of pity before shaking his head and walking away . From there I went in search of food, wandering around the Lanes looking in the shops it was nice to see that some of them had not been “modernised” and still had their original frontage and in some cases interior, same for the Pubs  which appeared to still be Pubs and not Gastropubs or Sports bars, it was also pleasing to see what looked like for want of a better word  “Hippies selling all manor of things from hand made Beaded Jewellery, paintings, and books of poetry and quotations to Tattoos and even Psychic readings , being unable to find a  suitable place to eat that wasn’t   crowded I settled for a sandwich and a Tea from a Bakers  and sat people watching , Resuming my stroll I came across a Sporting Goods shop -as the shop sign proclaimed- something you don’t see a lot of in London or few other places I imagine-that sold De-activated Replica Firearms , so I spent a while looking at some models of  old “Cowboy” Guns before heading back to the Sea front to meet up with the others in time for departure ,by this time it had become fairly Windy and the Sea was almost deserted , I again went on the Pier in to the main Arcade, in the past I would have gladly spent some time and a few quid on the amusements ect but on these days I found the noise and the flashing lights a bit overwhelming a combination of modern technology and middle age maybe after a stroll around the shops on the prom I made my way to the agreed  meeting point to join the others .

4:30 approx and We all met at the Bus everyone seemed to have had a fairly enjoyable afternoon, some went shopping , some on the fairground , and others like me just strolling around , the Journey home took a bit longer than the outward bound mainly due to rush hour traffic, and a longer than planned stop at Cobham services, but it wasn’t too bad due to some amusing and enjoyable banter between the weary travellers, we arrived back in London around   8:00 our Driver Patrick conveniently dropping two or three people off as near to their home as possible. All in all an enjoyable day . I would like to say a big thank you everyone for the day with  special thanks to Fatina and Michelle for preparing the food for the trip down, A massive thank you to Patrick our driver, for giving up his free time and for his patience regarding delays ect , and to Mike S for providing the funds for the day ,